Annex
—Analysis of Part A

A major composer of the 20th century, Giacinto Scelsi has written several works that challenge traditional descriptions of Western music. His mature works (after 1950) are characterized by a concentration on single notes, microtonal fluctuations, harmonic allusions, and variations in timbre and dynamics, combined with mastery of form.

Ohio musically expresses the intensification of sound through the continuous evolution of sounds and dynamic contours.
Scelsi employs a composition method that organizes the perceptible surface of music, capable of including all categories of sounds. It is a dynamic concept of pure sound ('vibration') where changes and speed are compounded. That is to say, the very nature of the sound and its acoustic properties.

Ohoi is written for sixteen strings (four quartets) where each stand plays around a single note. In this respect, the cellos constitute a “quartet”.

This music requires the ability to displace gradually (glissando) to pitches outside of the tempered scale. The choice of instrumentation in Ohoi is therefore sine-qua-non for its sound purpose.

The writing is an accumulation and rarefaction of the density and dynamics of sound. The piece is a horizon converging towards unison which seems, over time, to attract it.

There are two parts (A, B and B¹), almost equal in duration. The entrance to violins I (m.46) marks the second part.

Part A (up to m.48) is written in strict canon at the fourth, and part B in strict homophony, with a return from the writing of canon in B1 (m.78). Parts A and B are composed of several periods which are linked according to an identical principle, however, less strict.

Each stand plays the same transposed music, so the piece is written as if it were a single instrument. This writing provides a systematic and automatic framework for the phenomena of the accumulation and densification of sound matter.

m.78 (B¹)
— the interval ambitus tightens (towards unison at the end)

m.79-90
— saturation of the frequency domain with excess information ('the climax')

Canonical entries: Part B¹ (m.78-100)
—Return to writing in strict canon (four stands)
—The first three entries are the tighest (by half)
—Non-parallel transposition (tightening of the ambitus)

The elementary material of the piece is made up of 'figures' (energized microfluctuactions of all kinds) which are connected around the pitches held.

The figures (and their articulation: small notes, tenuto, staccato and the playing modes: tasto, sul ponticello, legno, flautando etc.) are mainly intended to affect the timbre of the whole.

Like cells, the figures have an additive role, of mixtures and components in a single entity of continuous and evolving sound. The equivocal repetition of the figures as well as the variation of the articulations, the attacks, the microtonal intonations, the modifications of the timbre, the harmonics, the dynamics, constitute the sound material and give the music its content and its form. The evolution of the material is therefore more striking than the material itself.

To highlight the transformation process, Scelsi renounced any event that could have created an ambiguity. The use of this material neutralizes anything that could lend itself to gestural perception.

The figures are therefore a scale of the intensity of vibrational phenomena more than recognizable musical gestures. It is an approach that emphasizes musical parameters other than pitch and duration by the constant sense of the modification obtained by a continuous transformation of the material. 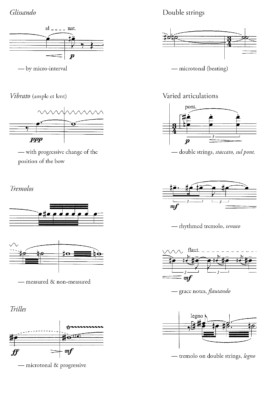 The glissando has a main role in this work, allowing the aspect of continuous sound between notes, or non-tempered—sound being by nature indivisible. It is the first figure in the piece and it underlines its future.

Similarly, micro-intervals are not subdivisions of tempered intervals. They act as instrumental points of reference in a continuum of sound. Acoustically, they are used to polarize two close frequencies (<½ tone) in order to create phase oppositions. We hear beating, an alternation of reinforcements and attenuation of the sound where the pitches work as centres of attractions where the sound space is concentrated.

Scelsi manages to evoke the most astonishing musical effects through the multiplication and proliferation of these figures and their timbral manipulations.

The writing is thought globally, as a whole—the unification of the material inside dynamic phenomena, in order to integrate all the parameters of the sound. Although the form is strict (canon), the details of the instrumental parts are organic. They consist of '“lines”of sequences of figures, in bursts of dynamic energy, surrounded by rests.

The lines are essentially timbre relays around the notes alone ( ±1 tone). We can thus say: the stimulation and reinforcement of a frequency around a small threshold.
They have a profile of type:  increasing ~ plateau (intermediate state) ~ decreasing

The “periods” are superimpositions of the lines by successive generation, often in imitation or in relay, either between the instrumental parts, in each stand.

The periods have a profile resembling the lines, but in the order of the nuances and the dynamism of the figures, enchained by more or less static intermediate transitions, which translate in instrumental writing by an evolution of the figures and dynamics according to the same principle.

We can therefore observe that the global dynamic profile, as well as the changes in metrics, time periods (more than the evolution of the pitches, even if they often coincide).

The relationship between lines and periods serves functionally to build the musical play and become sound (the driving energy), not a counterpoint of voices. It's a question of sublimating the material.

Scelsi tends to favour consonant intervals (natural resonances) which appear in the audible part of the acoustic model of the sound and are found in its internal structure. This effect sometimes gives the impression of chords classified as halftone, transient, and amorphous.

Pitch Profile
—This profile shows the changes in the direction of the pitches (inflections). Its curve emphasizes the shape: a large horizon bent towards a singular high point.
—The movement of the pitches is in parallel (parts A, B) to part B¹ (m.78), then the low pitches accelerate towards the high unison at the end.

Harmony in Ohoi is a conception of harmony inseparable from the timbre of instruments.

This allows to play on the ambiguity between the instrumental timbre (“object timbre”) and global timbre (“spectral timbre”). In this music, the domains of timbre and harmony are mutually supportive insofar as the elementary material of the piece is associated with this conception. It is an approach highlighting musical parameters, other than pitch and duration, by the constant sense of the modification obtained by a continuous transformation of the material.

In Scelsi, harmony as much as the pitches, is latent to interacting sound phenomena, and leads to a certain neutrality; certainly not dull, but the absence of clearly linked harmony sequences.

As the piece progresses, the harmonic relationships become so complex that we hear a reduced inharmonicity. The proximity of the figures, their dynamic profiles, and their tightened ambitus cause a multiplicity of unexpected sound phenomena which enrich the frequency domain, even the saturation of the spectrum - a purely harmonic zero point.

In general, the harmony in Ohoi is constructed by three or four consonant interval notes (fourths, thirds) with microtonal intonations ± an adjacent tone, a counterpoint of microtonal inflections.

Inseparable from the use of complex sounds are the “acoustic phenomena” which are actualized by coincidences in the frequency domain.

These phenomena, including all types of sound interactions such as emergent sounds, resulting sounds, artifacts, the least audible lower and upper harmonics, etc. are the consequence of the laws of natural resonance.

This model is an acoustic representation of the energy as well as the 'density' of sound (the dimension which Scelsi highlighted). In principle, the greater the intensity, the more the resonance phenomena appear (part B).

This model is mainly used to link the score in its sound aspect and also to show the evolution of sound over time (its form).

The mastery of harmony, even a purely frequency harmony (that is to say, located outside of any functional tonal principle and not given a priori by the instruments) is immediately remarkable in Scelsi.

Ohio is not composed of juxtaposed sound objects, nor of successive sections, but of changes, of continuous transitions where the material and the form coexist in a functional and interacting solidarity, within the same entity. All the elements are brought together to make a complete model.

Its sound material comes directly from the physical model of sound, whose 'creative principles' are principles of the nature of sound themselves. It is therefore a perfect match between form and content. The whole is similar to the parts.

There is a strong detached and transient quality (filled in with intermediate states) in Ohoi. During the most intense harmonic passages, there is a certain serenity—which allows this music to be distinguished from that of its contemporaries. It would appear to come and go into the unknown, having passed a point of no return.

Scelsi refused to write program notes, judging writing about music impossible: 'I think I have nothing to add.'¹

—sequence of metered to non-metered figures

Period I
—sequence of figures (construction of periods)
—change of meter