'Angelic perspective' in the frescos of Fra Angelico

Fra Angelico (1395–1455), was an early renaissance friar and painter. His work is characterized by the use of the unadorned fresco technique, clear bright pastel colours, careful arrangement of a few significant figures and the skillful use of expression, motion and gesture, of his religious devotion.

Angelico's mastery of linear (normal) perspective¹ and  perspectivity² enabled him to subtly alter the point of view from that of a person, to the 'Witness', in divine, not human space, as part of the in the natural world, the ordinary.

¹ The laws of normal perspective were systematized in the XV century, by Brunelleschi, and were constructed with great geometric precision.
² Perspectivity: the correspondence between points on two lines in a plane determined by a point of that plane not on either line, has higher-dimensional analogues, or higher-dimensional perspectivities.
Catalog : Fra Angelico catalog raisonné, 1970
These frescoes are located in San Marco Monastery, Florence, Italy.

Perhaps the most celebrated of the frescoes is The Annunciation, not only for its topic, but use of the aforementioned technique, in which the vanishing point of the image is skillfully altered.

The Annunciation illustrates the architectural details used to create the space—the interior reproduces that of the cloister in which it is located—figuring a peaceful and harmonious sense of 'presence'. 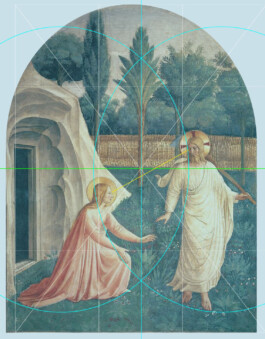 One of the first frescos in San Marco. Despite the solidity, the three-dimensionality and naturalism of the figures and the realistic way in which Mary and Jesus' garments hang or drape around them, it is as if they were weightless. This fresco portrays Jesus as the risen Christ, soon to ascend (perhaps already having initiated the process). He is also portrayed as a gardener.

'Noli me tangere' (touch me not) likely means, it is not possible to touch me. The original Koine Greek phrase, Μή μου ἅπτου, can also be understood as 'cease holding on to me', a continuous action, not one done in a single moment. 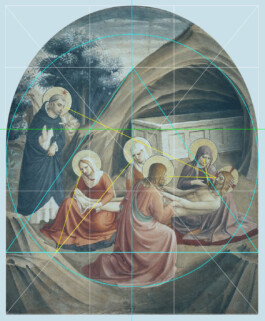 Here, purposefully, I suspect, Angelico reverts to a more Byzantine Iconic expression where linear perspective is intentionally not used (look at the coffin), ie. the absence of architectural space, yet quaintly equilateral.